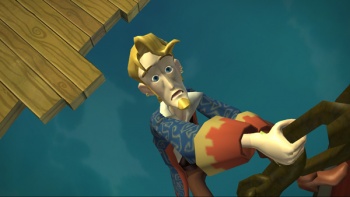 LucasArts is bringing back the Monkey Island franchise in style with a remake of the original and a new episodic series, but it's not quite ready to commit to reviving every Monkey Island game.

Monkey Island fans and newcomers should just be happy that LucasArts has decided to bring back as much Monkey Island as they are. Not only are we getting a remake of the first Monkey Island with modern graphics and full voice-over, but Telltale's also making a new episodic series that's starting next month. But no, I'm sure there are some of you out there who want more. Well, you're not getting Monkey Island 2: Special Edition. Yet.

"I think LeChuck's Revenge would be awesome to revisit, but at this time we have no plans for future updates," LucasArts producer Craig Derrick told Destructoid. "It all comes down to whether people like what we've done with the Special Edition and see the potential for future projects. Sales are definitely an important measurement of this, but so is fan and critical reaction to the game."

Derrick wants the Monkey Island revival to not only bring back old fans but get new people interested in the series and point-and-click adventure games as well. If things work out this way, he'll see about doing more. "If both parties show up, enjoy the game and want to see more then I think we'll be on the right path to not only do more updates, but all new adventures," he said.

New adventures will start on July 7 when Telltale's Tales of Monkey Island series begins. The Secret of Monkey Island: Special Edition is coming out on Xbox Live Arcade and PCs later this summer.

Cloudy With a Chance of Galactus MovieBob 53 Comments

Escapist Podcast: 087: The Death of LucasArts (But Not Friendship!) The Escapist Staff 43 Comments