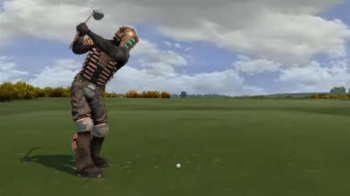 Tiger Woods PGA TOUR 10 apparently features an unlockable costume that will allow you to hit the links dressed as Isaac Clarke, the protagonist from sci-fi survival horror Dead Space.

Making fun of golfing attire has long been a staple of cartoonists everywhere: Maybe it's the dorky checkered sweater-vests, or the floppy berets, or the silly spiked shoes... whatever it is, some golfers look silly. Of course, they're not wearing a full suit of zero-g mining gear, either.

I'm really at a loss. I don't know what to say other than this image (and the corresponding video) is one of the most bizarre and incongruous things I've seen in quite some time. Apparently, the suit isn't just for show, either - wearing it will unlock the "No Known Survivors" achievement, adding 35 points to your gamerscore.

You know what? It might be nice to have that suit when you're floating in a wrecked spaceship with nothing but its protective layers keeping you from cold, deadly vacuum ... but it strikes me that wearing it in the warm sun of a golf match might be really, really uncomfortable.