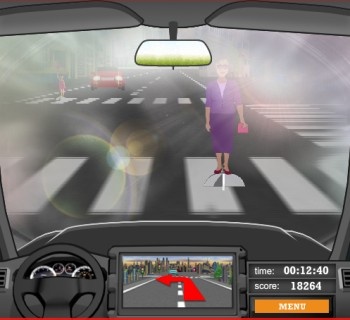 Gamers of all ages can now experience first-hand the thrill of becoming old, feeble and unable to drive to the local store without committing vehicular manslaughter in Driver Seat, "the world's first senior driving simulator."

Produced by insurance giant Liberty Mutual, Driver Seat is an attempt to demonstrate the various obstacles facing elderly citizens when they get behind the wheel of a car. The game lets people choose to drive as a 65, 75 or 85-year-old in one of four environments: Urban, suburban, outskirts or wilderness. Not only will you drive, you'll also take part in a number of mini-games, each designed to illustrate the increasing difficulties faced by drivers as they age.

Liberty Mutual described the game as a "revolutionary digital approach to tackling the highly sensitive subject of senior driving." Calling it a "great conversation starter," Senior Vice President Greg Gordon said, "Most families are simply not addressing the very important issue of senior mobility, perhaps because they feel ill-equipped on how to approach it. The game... can help overcome that reluctance."

Of course, the game is designed for failure; I was able to maneuver through much of the game reasonably well (even as a nearly-blind 85-year-old) but time and again, the simple act of parking eluded me. Parked cars and pedestrians alike suffered as my gnarled fingers spun the wheel of my yacht-like '78 Cadillac hither and yon, and ultimately it took me longer to get the thing into a spot than it would've taken to just pull on some shoes and walk. But it's quite possible that I may just be the wrong demographic for a game like this; as a long-time gamer I've been thoroughly indoctrinated to believe that when it comes to driving, fatalities are less important than getting there fast.

Dealing with an elderly parents whose declining faculties create a safety hazard every time he or she gets behind the wheel of a car isn't funny. Fortunately, Driver Seat is! Give it a shot at libertymutual.com.