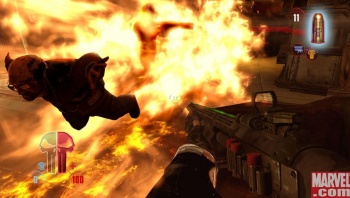 Frank Castle will be doling out some righteous fury on the PS3 later this summer when the PSN-only The Punisher: No Mercy arrives at the beginning of July.

The Punisher is a character who seems built for videogames, especially nowadays when the stubble-faced, tough but haunted badasses are par for the course when it comes to game protagonists. So I for one was a bit disappointed when there was no news of a tie-in game for last year's The Punisher: War Zone movie, but ZEN Studios' The Punisher: No Mercy looks to remedy that situation when it arrives exclusively on PSN in a couple weeks.

Unlike previous Punisher games, No Mercy looks to be a multiplayer-focused FPS featuring "an eclectic mix of Punisher allies and villains." Gameplay details are somewhat scarce, but ZEN Studios managing director Zsolt Kigyossy promises "a customizable system and fast-paced multiplayer action," whatever that means. Matches will allow eight players (four on four I'm guessing) to battle it out in "solo and team-based missions."

There's also a single-player story mode that seems like something of an afterthought. Marvel says it features an original storyline and art from Marvel artist Mike Deodato, and will serve as a way for players to unlock additional content.

"Our team has been working long hours to deliver a first-person shooter experience that will live up to the Punisher name," Kigyossy said. The Punisher name, of course, goes hand in hand with dark, over-the-top ultra-violence, so here's hoping No Mercy can deliver on that promise. It's rated M, so there's a start.

No Mercy will be available on July 2 for the "criminally low" price of $9.99 on PlayStation Network.

Social Justice Warrior: The Switch: 3 Classic Characters That Should Be Gender Swapped RossaLincoln 78 Comments
Comments on