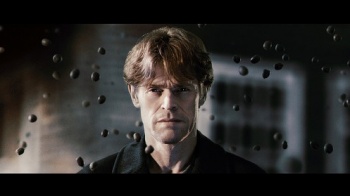 Anti-Christ, the 2009 Lars von Trier film that won an "anti-prize" at Cannes for being "the most misogynist movie from the self-proclamed biggest director in the world" is being made into a videogame.

Starring Willem Dafoe and Charlotte Gainsbourg, Anti-Christ isn't the sort of movie you'd expect to be made into a game: It's generated high levels of controversy for its explicit depictions of sex as well as graphic sexual violence. "I rarely find a serious film by a major director to be this disturbing," critic Roger Ebert said of the film. "Its images are a fork in the eye. Its cruelty is unrelenting. Its despair is profound." Blogging at Time.com, Richard and Mary Corliss described the film as "the spectacle of a director going mad."

Nonetheless, Zentropa, von Trier's production company, is developing a new game based on the film called Eden, a "nightmarish version of Myst" that will require gamers to upload a profile describing their greatest fears so the game can adjust to "challenge" them. Game Director Morten Iversen, who worked on the Hitman series with Io Interactive for six years, said the director is "extremely fond" of videogames and has been interested in making one for some time, but he admitted that basing a game on Anti-Christ is going to be tough.

"[The movie] goes against all the conventions of how you make games and what you can do in games," he told MTV Multiplayer. "Dead kids, nudity, graphic violence. It will be a very controversial game, and it'll be a game that doesn't really compare with anything else."

"We don't expect Wal-Mart to roll in crates of this and put it on their shelves," he added. "Absolutely not available at Wal-Mart! "

The game isn't planned for release until sometime in 2010 and will be available exclusively as a digital release through sources like Xbox Live and Steam. Iversen said that different versions of the game would be produced and released in order to satisfy the content requirements in various regions. "Just like the movie, they made two versions so they can get released in countries like Italy and the U.S., [countries] that view things differently than we do in Denmark," he said.

Hey, it can't be any worse than Jumper.