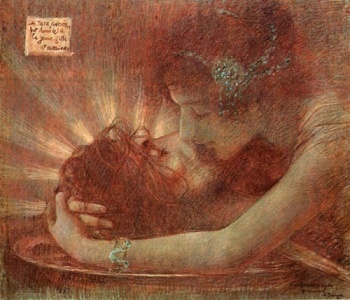 Tale of Tales, the artsy crew behind indie horror title The Path, have announced their newest project, an "interactive vignette" called Fatale that takes its inspiration from an Oscar Wilde play.

No, it's not the name of some Chinese bootleg of Microsoft's Natal. Fatale is the newest project from The Path creators Tale of Tales (designer duo Auriea Harvey and Michael Samyn), and is based primarily on Oscar Wilde's play Salome, which in turn is based on a story from the Bible about a young woman who dances for her stepfather in exchange for the head of John the Baptist.

Seems like as fitting a tale for a game as Lars von Trier's Anti-Christ, but Tale of Tales says that Fatale isn't so much a "goal-oriented quest" as it is "an explorable painting or interactive vignette" in the spirit of their 2008 project, The Graveyard. In Fatale, you'll be witness to the event of Salome's dance and John the Baptist's execution, and will get to experience "the story through the emotions and thoughts of the characters involved."

"We're interested in the idea of a love story that ends in death," said Tale of Tales. "But we also want to include other elements of the tale." To that end, Fatale will consider the mother-and-daughter tension between Salome and Queen Herodias, as well as the political subtext of the story. So, yeah, this is some serious stuff. What's next, a game version of Tristan und Isolde?

Fatale will be released on October 5 this year, the 78th anniversary of the first public performance of Wilde's play in English.

Stolen Pixels #117: The Path Will Take Her to The End Shamus Young 29 Comments