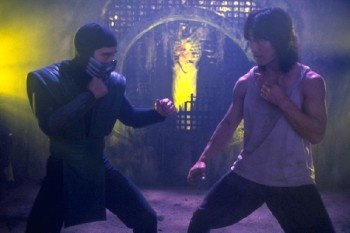 The producer of the 1995 Mortal Kombat movie has launched a lawsuit against Midway that threatens the sale of the bankrupt studio to Warner.

Film producer Lawrence Kasanoff filed suit against Midway in U.S. Bankruptcy court on June 24, claiming that his company, Threshold Entertainment, holds a number of "intellectual property interests" in the Mortal Kombat franchise arising from the Mortal Kombat films and other related properties. He says Midway has refused to acknowledge his "exclusive license" rights to certain aspects of the franchise and wants the court to declare and protect that exclusivity.

Kasanoff claims that it was he, not Midway, who took Mortal Kombat from a conventional fighting game featuring "flat, cookie-cutter characters" to the fleshed-out mythology it is today. "In 1993, Kasanoff visited Midway and its CEO, Neil Nicastro, with an idea to launch the Mortal Kombat concept in a totally new direction," the suit says. "Specifically, Kasanoff proposed to develop derivative works in various media based on the original game, including a full feature-length motion picture, a television series and other productions."

"Midway was initially skeptical, as Kasanoff's idea was revolutionary at the time," it continues. "Although the Mortal Kombat game had tested well in arcades, at that time, no one had ever successfully transitioned a videogame concept into motion pictures and other media, and Midway had made no effort to move beyond videogames with the Mortal Kombat concept. But Kasanoff was ultimately able to persuade Midway to go along with his vision."

Kasanoff describes himself as the "master architect and author" of the film and says he was the one who "brought to life" Mortal Kombat characters including Sonya Blade, Scorpion and Liu Kang. Among the other Mortal Kombat derivatives he claims responsibility for are the Mortal Kombat website, a Mortal Kombat: Behind the Dragon television special, the Mortal Kombat live stage show, an animated special, soundtrack to the film, the Ultimate Guide to Mortal Kombat CD-ROM and numerous others. To date, he says, the franchise as a whole has grossed over $4 billion.

But the proposed sale to Warner Bros., he says, which will include all assets related to the Mortal Kombat videogame series, doesn't take into account Threshold's interest in the franchise. As a result, he wants the court to declare that Threshold does in fact have an exclusive license to produce derivative works as well as other rights associated with the franchise and that the sale of Midway's assets to another entity must not impinge upon those rights.

Kasanoff's claim is problematic for Midway because any potential acquisition, including Warner's $33 million bid, is going to be centered around Mortal Kombat, the company's premiere franchise. Midway is dangerously close to being a one-trick pony and any restriction of access to that property will no doubt discourage buyers or at the very least drive the price down drastically. There will no doubt be much legal wrangling ahead. A copy of Kasanoff's lawsuit is available here. (PDF format)