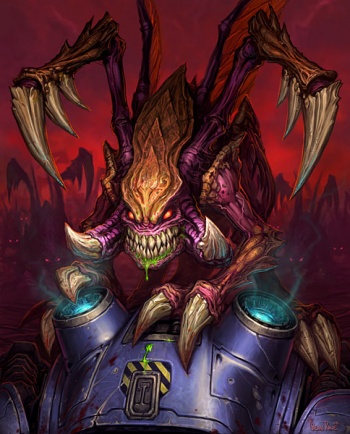 Eager to play a round of StarCraft II with your buddies? You'll have to use Battle.net, since the game will not support LAN connections. On the plus side, the service will still be free.

It's no secret that I'm really excited for StarCraft II - like really, really excited - so I've been eagerly devouring all the news coming out of last week's multiplayer press event like a starving dog who just discovered a truck full of smoked hickory bacon. For the most part, it's been good news, with one exception: The game won't recognize LAN connections, Rob Pardo told IncGamers.

According to Pardo, the choice to exclude LAN games "is because of the planned technology to be incorporated into Battle.net," which will be revealed at a later date.

It's a surprising move, given that the first game's massive popularity was in part driven by LAN parties - many gamers including myself have fond memories of spending evenings and nights wired together with friends, talking trash as we spawned more Overlords. Without its "Spawning" feature, which allowed multiple installs of the multiplayer client off of one CD key, there's no telling if the game would have anywhere close to the fanbase it enjoys to this day.

I'm not sure what will happen if, for whatever reason, a group of would-be SC2 fans finds itself without a connection to the Internet for Battle.net, so my reaction to this one is caution. On the plus side, however, the same interview confirms that, although the company is looking to "monetize" Battle.net in some way, Blizzard remains committed to keeping the service free to play on for StarCraft II and any games to follow (presumably including Diablo III):

One idea which has been discussed in different iterations is microtransactions, meaning the service is free, but added value services like starting a custom tournament, league, or the like would cost a small amount of money.

It's an interesting philosophy, and one that makes sense - though apparently advertising revenue will not be a part of it, as many have suggested. "We spent a lot of money on Battle.net, right, so we need some way to sustain it," said SC2 lead Dustin Browder, though "current mockups don't include ads."

Beyond that, Browder told Kotaku that the team was hoping for the SC2 beta to last approximately four to six months. Given that we're almost halfway through 2009, this could put Blizzard dangerously close to running over its goal of releasing the game before the end of the year. Of course, it's not impossible: "It's getting there," Browder joked. "We can still make four!"

Of course, the company is determined to make sure the game is in tip-top shape before it releases the beta: "The minute beta goes out, we lose a lot of efficiency."

Update: Blizzard PR rep Bob Colayco confirmed to Joystiq that the company did not plan to support LAN games in StarCraft II:

Several Battle.net features like advanced communication options, achievements, stat-tracking, and more, require players to be connected to the service, so we're encouraging everyone to use Battle.net as much as possible to get the most out of StarCraft II. We're looking forward to sharing more details about Battle.net and online functionality for StarCraft II in the near future.