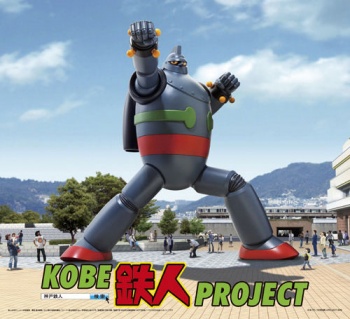 With the city of Kobe only months away from the completion of a 59-foot model of the iconic giant robot Tetsujin, Japan is this much closer to realizing its dream of a giant robot national army.

Work on a life-sized Gundam in Odaiba, Japan was only completed a matter of weeks ago, but another Japanese city is already nearing the construction of its own life-sized giant robot statue. The robot in question this time is one of the icons of giant robot history, Tetsujin 28-go, known in the English-speaking world as Gigantor and arguably the original gangster of giant robots in Japanese culture.

Tetsujin will stand in Kobe's Wakamatsu Park and match the Odaiba Gundam in height at 59 feet. Construction of Tetsujin's parts will end in July and the statue should be constructed and make its debut in late September or early October. Since it won't be standing upright but in an action pose, it'll technically only be some 49 feet off the ground from top to bottom, but hey, that still makes it a giant robot in any book.

While the Gundam statue commemorated a watershed moment in Japanese pop culture history - the 30th anniversary of the first Gundam anime - the Tetsujin will serve as a symbol for something a bit more serious. In 1995 Kobe was hit with a devastating earthquake - the statue is meant to serve as a monument to the revival of the city in the years afterward. Tetsujin's creator, Mitsuteru Yokoyama, was born in Kobe, and the statue will stand in Nagata Ward, the part of Kobe that was worst hit by the disaster.

The project has cost about $1.4 million, with the city itself pitching in nearly half a million and sales of Tetsujin-branded curry also providing funding (only in Japan). The statue will weigh 50 tons, and unlike the Gundam statue, does not feature any moving parts. Which is too bad, but also unlike the Gundam statue, it'll be on display permanently, which is good and nice to know since that means it'll be good to go when the giant robot wars begin.

Check out some video of Tetsujin under construction - it's probably the closest thing you'll ever see to what building a giant robot really looks like.