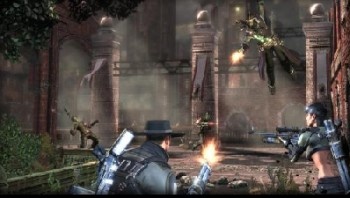 The development team behind the third-person shooter Damnation has been laid off and court documents reveal that studio Blue Omega has been embroiled in legal problems and acrimony involving subcontractors and publisher Codemasters.

Court documents uncovered by Shacknews show that Blue Omega launched two lawsuits against subcontractors working on Damnation. The first, filed in January, alleged that Codemasters had terminated its development agreement with Blue Omega and then enlisted Point of View Inc., which had been contracted by Blue Omega in 2007 to work on the game, to continue development. Blue Omega sought damages of at least $75,000 from Point of View but voluntarily dismissed the case five days later.

The second suit was filed in February, claiming that another contracted developer, Velvetelvis, produced "unacceptable," "unfinished" and "untimely" work which caused Blue Omega to miss deadlines with Codemasters. That suit, which is still pending, also seeks minimum damages of $75,000.

This may help explain why Damnation, which began life as a second-place entry in Epic's inaugural Make Something Unreal contest, has fared so poorly in the eyes of reviewers. Our own Tom Endo said it was more like a rough draft than an actual game, describing it as "the ashy remnants of a spark that ignited in 2004."