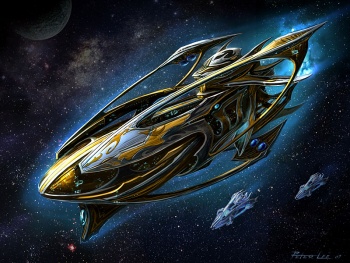 Over 13,000 StarCraft fans have signed a petition for LAN support in the upcoming sequel, but community rep Karune says the company is committed to its Battle.net platform.

Fans unhappy about the recently announced lack of LAN support for Blizzard's upcoming StarCraft II have taken to the most honorable and unquestionably effective form of protest: the Internet petition. In said petition, the undersigned demand - er, very politely request - that the company reconsider its decision to make the Battle.net service the default for multiplayer:

We understand you will be adding amazing new features to Battle.net that you can't talk about yet, but regardless of any features you might add online, we would still like to be able to play in a traditional network where no internet connection is needed. For an internet connection might not always be available.

The new Battle.net sounds absolutely awesome from the sneak peeks you have given us, and people will most likely be using it exclusively, even if they only play single player. However, there is no harm in allowing LAN play as well, and it does bring further depth and life to what will probably become the top RTS of the next decade.

The points they make in support of LAN have been made before, but that doesn't undermine their validity: Internet is something you have to pay for and might find yourself without, lag-free connections, and so on.

Valid though their points might be, Blizzard seems to be holding firm. Blizzard's StarCraft community manager Karune defended the choice, saying that while piracy was a concern (as many had predicted), it was a question of functionality. Battle.net 2.0 will still be a free service, said Karune, and that the decision would bring the StarCraft community together in one spot.

Beyond that, though, Karune - who claimed to have been a LAN diehard in the day - expressed confidence that the new features and functionality in the upcoming Battle.net (powerful stat trackers and ease of replay sharing, among others) would win the doubters over: "We would not take out LAN if we did not feel we could offer players something better."

It's still a hard sell, and many remain unconvinced. Those in despair over the change may still have some hope, though - when one poster on the StarCraft forums pointed out that it would be perfectly possible to enable LAN play through Battle.net verification, Karune answered, "I will be sure to forward ideas in regards to LAN as described. I too have many fond memories of LAN parties."