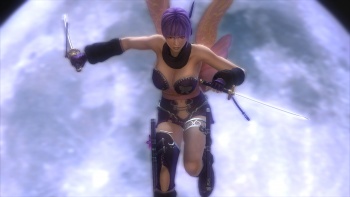 Team Ninja is cutting down on some on the over-the-top gore for their PS3 version of Ninja Gaiden 2, but in exchange for the blood, gamers will be getting more girls.

The first think you might notice about Ninja Gaiden Sigma 2 on the PS3 might not be what it adds but what it lacks. In the original 360 version of the title, limb removals and decapitations were accompanied by massive showers of blood that would probably give Quentin Tarantino a run for his money. In Sigma 2, this is no more. Instead, when you cut an enemy's head off, all you get is a magical shower of blue energy.

What's the deal here? Are Team Ninja looking for a tamer rating from the ESRB? That can't be, because the game's just as violent - it's just that the gore's gone. "Each game has its own concept and with Ninja Gaiden 2, the focus was on extreme violence," producer Yosuke Hayashi said. "But with Ninja Gaiden Sigma 2, we really questioned whether violence is a necessity for a game, so we decided to move away from that trend."

Violence not necessary in a game? I can't compute this statement. Please tell me there's a way to unlock a blood mode, right? "Being able to unlock higher levels of gore would be out of kilter with the concept of the game," Hayashi explained. Crap.

Sigma 2 sure has less blood than Ninja Gaiden 2, but it sure does have more of something else: girls. The game adds three playable characters to the game - Rachel from the original and its PS3 remake, Ayane of Dead or Alive fame, and Momiji from the DS-only Ninja Gaiden: Dragon Sword. On top of that you get online co-op, some difficulty tweaks (save points are apparently more conveniently located) and more. That enough make up for the lack of blood, you pack of savages?