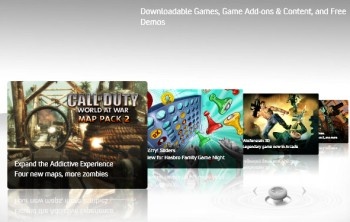 Microsoft plans to bring interactive ads to Xbox Live within the year but Major Nelson says users don't need to worry about a "huge influx of ads" cluttering up the dashboard.

Microsoft revealed its plan to bring Silverlight-based ads to the Xbox Live service yesterday, part of an effort to enable advertisers to create campaigns across four different platforms - television, mobile phones, desktops and Surface - without having to "re-purpose" for each one. "Silverlight-powered media on Xbox will have the same appearance as ads seen on a Web browser," according to a MediaPost report. "Think technology that competes with Flash, only supported by 6 million Silverlight developers worldwide who now have the option to tap a variety of Microsoft tools and technologies and develop marketing campaigns for Xbox."

"We are just starting to scratch the surface of what's possible," said Sean Alexander, director of Microsoft's Advertising Business Group. "As a marketer, your job is to build an emotional connection with the brand, no matter the platform."

Despite Alexander's enthusiasm, many Xbox Live users are less than thrilled at the prospect of the service being swamped with obtrusive ads. But Larry Hryb, the Xbox Live director of programming better known as Major Nelson, said there's nothing to worry about, assuring people on his blog that Microsoft isn't going to bury gamers with advertising.

"I need to let you know that you don't need to worry about a huge influx of ads across the dashboard," he wrote. "One of our core principles is to enhance, not interfere with the gaming experience, and we work directly with our partners to only deliver experiences that are relevant to the Live community. Silverlight will help make those ads a more organic part of the dashboard, like we've done with some of the NXE slots in the past."

"No one on the team wants to turn the dashboard into something that looks like like Shibuya Crossing," he added. "That's just not good for anyone."

Many users responding to Hryb's post remained unhappy about the prospect of the ads, however, suggesting that while they might be appropriate for people on the free Silver level of service, Xbox Live Gold members shouldn't have to put up with any advertising at all.