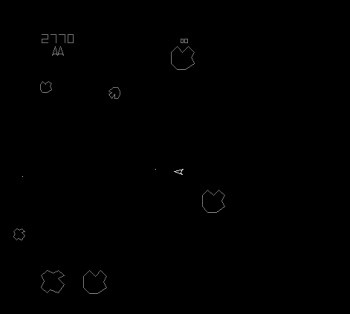 Good news, cinemaphiles! The wait is almost over! Universal Pictures has secured the rights to develop a movie based on the 1979 arcade classic Asteroids!

Yes, I'm talking about Asteroids, the famous arcade stand-up in which players control a triangular spaceship battling hordes of rampaging space rocks in fully-rendered 2-D. The ship not only rotates and fires but can also actually move forward, allowing particularly skilled players to relocate the vessel to other, less asteroid-filled parts of the screen. The asteroids themselves are complex adversaries that break down into increasingly smaller components each time they're shot, until they finally dissipate into nothingness in the cold, empty void of space.

Universal actually had to struggle through a bidding war with three other studios to pick up the rights to develop the film, according to the Hollywood Reporter. The film is being produced by Lorenzo di Bonaventura, whose most recent credits include the critical darling Transformers: Revenge of the Fallen and the hotly anticipated dramatic ensemble G.I. Joe: The Rise of Cobra, while scripting duties will be handled by Matthew Lopez, the wordsmith behind the latest Dwayne Johnson smash hit Race to Witch Mountain.

Concerns that the Asteroids back-story might be a little too thin to support a full-length feature film are perhaps valid but this won't be the first tough project Universal has tackled: The studio is also in the process of creating movies based on other classic game properties including Battleship and Candyland. Rumors that Gary Busey has been cast as the flying saucer could not be confirmed by press time.