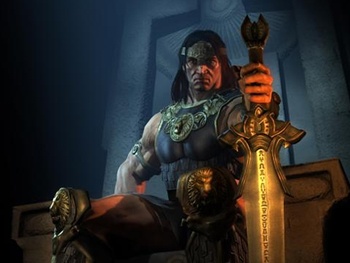 Funcom has announced the launch of an Age of Conan "re-evaluation campaign" during which anyone with a closed account can reactivate and play the game for two weeks at no charge and with no strings attached.

It's been a rough road for Age of Conan, the Funcom MMOG based on Robert E. Howard's famous fictional world. Plagued by launch delays and bugs, the game racked up solid early numbers but saw its membership drop off precipitously just a few months after it came out. Funcom was eventually forced to cut the number of servers supporting the game from 49 to 18, but it also continued working on the game and is now ready to show off the "massive updates and improvements" that have been made.

"For anyone with an inactive account who ever thought about giving it another try, this is your chance," said Morten Larssen, Funcom's vice-president of sales and marketing. "After the hugely successful launch last year we immediately started working on updates that would make the game better and provide more content for players, and that is what we have been doing this past year. With the most recent update just out the door, this is the time to ask players to come back and see the results!"

Those results include the addition of the outdoor area of Ymir's Pass, the "huge dungeon" of Xibaluku and the city of Tarantia Commons, each of which offer new quests, enemies and rewards. A new PvP notoriety system allows players to become murderers and hunt each other down for exclusive rewards, while support for DirectX 10 technology has also been implemented.

"I think that players have always seen the great potential in Age of Conan and we have put a lot of effort into realizing that potential," said Game Director Craig Morrison. "The game has improved tremendously since launch and we look forward to having players come back and seeing the changes for themselves!"

If the prospect of free gameplay isn't convincing enough, have a look at the list of Ten Reasons to Give Age of Conan Another Look, put together by our friends at Warcry, who said the changes "are nothing short of staggering."

The re-evaluation campaign begins today and runs until July 22, during which time anyone with a closed account in good standing can reactivate and play free for two weeks. The new trial campaign will be temporarily closed, Funcom said, "to ensure the best play environment for all returning players." More information is available at ageofconan.com/updates.