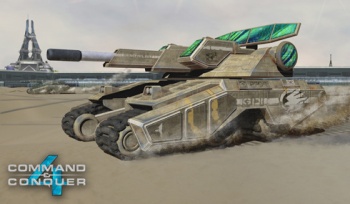 Somebody over at EA's public relations office in the UK is getting fired right now, because the company mistakenly updated their Twitter with an announcement for Command & Conquer 4.

You play with the internet, and you're gonna get burned. PR folks should know this better than anyone, considering how often things get leaked despite all their attempts to keep info airtight and locked down in a glass case of confidentiality. When exposing something to the public is as easy as clicking on a single button and releasing info to the entire world, well, you have to be careful.

That's the lesson Electronic Arts' PR branch in the UK learned today when somebody accidentally updated the company's Twitter with these words: "New release: EA LOS ANGELES ANNOUNCES THE DEVELOPMENT OF COMMAND & CONQUER 4" followed by a link to a press release...which didn't lead anywhere. The post was taken down, but luckily Joystiq snapped a screencap ("pics or it didn't happen" is the adage appropriate here I believe).

Oops! Guess whoever was checking the Twitter and wanted to see what Shaquille O'Neal's eating for lunch and then mistakenly hit paste when they meant to hit something else must have gotten a stern talking to. Hope he/she still has a job, because it's rough out there.

Not that this comes as a total shock to me. EA's been making some noise about C&C4 lately, what with the online surveys they've been putting out to measure interest in the future of the game. In one survey they mentioned the possibility of the series taking on some MMOG-esque aspects. They might as well just come out with it now and let us know everything. The cat's out of the bag.

UPDATE: Guess this leak was only a day early, as EA have officially announced C&C4 today. Developed by EA Los Angeles, the game will bring the Tiberium series to an "epic conclusion" and does indeed bring some RPG-y innovations to the series like "class-based gameplay" and "persistent player progression throughout all game modes."

Oh yeah, and it's PC exclusive.