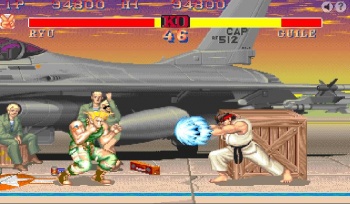 Not much to say about this one, really.

It's Street Fighter II. As a Flash game, playable for free! Oh, and it's apparently official - the results of a Capcom partnership with GameTap.

Well, to be precise, it's Street Fighter II: Championship Edition. That's the one with the four playable members of Shadoloo - Balrog, Vega, Sagat, and M. Bison. It's a completely faithful recreation of the groundbreaking grandfather of the modern fighting game, from the sound effects ("Hadoken!" "Sonic Boom!" "Uohohhhohohohoohh!") (That would be someone getting K.O.'d, of course) to the inputs.

Of course, playing with a keyboard is a bit different than doing it with a gamepad. I can't imagine how the hell you'd try to do Zangief's 360-degree inputs.

But that's okay. It's Street Fighter II, man. What more do you want?