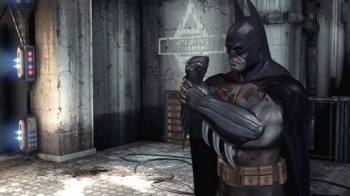 Eidos has denied allegations that it's once again tampering with review scores, saying there's not "one shred of truth" to accusations that it's trying to build an overly-positive early response to the upcoming Batman: Arkham Asylum.

The RAM Raider, a blogger and, apparently, gaming journalist who describes himself as "sick of the games industry," claimed earlier today that Eidos has been busted for trying to build pre-release hype for the upcoming game Batman: Arkham Asylum. Reviews by game magazines are currently under embargo and cannot be published until the end of the month, but, the report says, Eidos is willing to lift the embargo and allow early reviews for any magazine that dedicates its cover to the game and guarantees a review score of at least 90%.

It's worth noting at this point that there's absolutely no evidence to support this claim. Not one editor or staffer has come forward to corroborate it, not one errant email has been leaked and not one marketing guy has said something stupid in a telephone conversation. Yet some people are accepting the report at face value, no doubt spurred on by Eidos' unfortunate history of doing just the sort of thing the RAM Raider is accusing it of.

Eidos, naturally, has categorically denied the whole thing. In a statement to Kotaku, Jon Brooke, Eidos' marketing chief in the U.K., said, "With regards an article posted on RamRaider alleging that Eidos has fixed review scores for Batman: Arkham Asylum, we want to state that no discussions have been held about review scores with any magazines. In short there is simply not one shred of truth in this article, except for the title of the game."

Are truths and lies being told? Are semantics being massaged? Even without evidence, there will be those who have suspicions and who will see high review scores as proof that Eidos meddled, while low scores are proof that it had to try. It's a lesson to publishers everywhere: You can release 100 great games and nobody will care, but try to fake one Metacritic score...