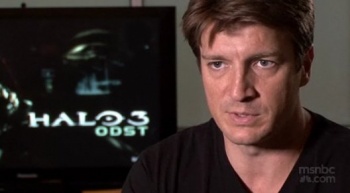 Firefly and Dr. Horrible star Nathan Fillion is the voice of Sgt. Buck in Halo 3: ODST, but he doesn't just act in videogames, he plays them, too.

When Halo 3: ODST ships this fall, players will have the pleasure of having orders barked at them by the gruff but romantic Sgt. Buck, voiced by none other than Firefly star and all around mega dreamboat Nathan Fillion.

Though the Halo series has a history of hiring top-tier voice talent (remember Arrested Development's David Cross and his comedic turn as a generic Marine in Halo 2?), few of them are probably as passionate about the franchise, and gaming in general, as Mr. Fillion.

Yes, as he revealed in an MSNBC interview on his role in ODST, the man loves videogames, just like you. Commence your swooning, ladies. "For me, first of all [Halo]'s a fantastic game," Fillion said. "I really enjoy it. It really works for me."

What "works" for Fillion is probably what works for the millions of other gamers who love the series - killing aliens, saving the world, etc - but there's another side of Halo that Fillion appreciates. "At the same time, it allows me access to friends of mine that are back in Canada, all over the United States, New York...even just Venice Beach, if I want to hang out with my buddy and just debrief, talk about our day, [I] just do it in Halo."

Check out the full MSNBC video for more on ODST and a full three minutes of being able to just sort of stare into Nathan Fillion's eyes...they're so deep, you just lose yourself in them.

Why Do We Love Nathan Fillion? Elizabeth Grunewald 152 Comments