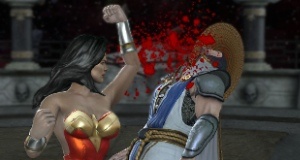 After more than 50 years of operating under the title Midway, the troubled Mortal Kombat developer will officially adopt a Warner Bros. name this coming Monday.

The months-log saga of the trials and tribulations of Mortal Kombat parent Midway Games may finally be coming to an end. After nearly going bankrupt, considering selling off their rights to MK, and assorted legal difficulties, and every other problem imaginable under the sun, Midway finally found salvation under the wing of media giant Warner Bros.

That salvation, though, comes at a price - this coming Monday, reports TRMK, Midway will be ditching the moniker it had since the company was originally founded back in 1958 (as Midway Mfg. Co., a manufacturer of amusement park equipment). The news has been confirmed via Twitter (as all things are nowadays), specifically the Tweets of Midway employees Hector Sanchez and Hans Lo.

On Monday the 13th, Midway will officially adopt a name that puts it under Warner Bros. umbrella - TRMK speculates that they'll adapt something related to the Warner Bros. Interactive Entertainment name, which does probably seem like the best bet at the moment.

Work on Mortal Kombat 9 (and any other titles in production) should not be affected as the only reported change is the title of the company. Even so, Midway was a huge name in the business in the mid-90s MK heyday, so ... well, it feels a bit strange, doesn't it? "Warner Bros. Interactive Entertainment" just doesn't have the same ring to it.

Update: Well, maybe not. Midway's Geoff Mogilner told Joystiq that the matter was far from clear-cut. "The name and the mark are owned by Warner Bros. and it is up to them to figure out the branding strategy," he said. "[WB] bought the assets and the trademark and all the copyrights and the logo and all that ... to say the name is dead, it's silly but, ya know, it's premature -- the company Midway Games, Inc. still exists."