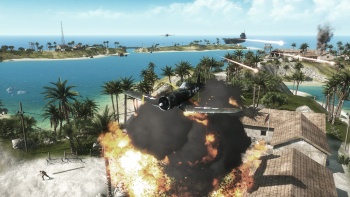 The fighting was thick and brutal on the first day of Battlefield 1943, with Axis and Allies alike inflicting a combined total of five million kills.

Now, World War II was - to put it lightly - one hell of a war. When all the fighting had stopped, the combined death toll of soldiers and civilians alike was estimated at anywhere from 40 million to a staggering 72 million dead. That's a truly mindblowing number, when you think about it.

Recently, EA subsidiary and Battlefield developer DICE indicated that in order to unlock the fourth "Coral Sea" map, players would have to earn it through total kills - 43 million kills, to be precise (the lower bound of estimated WW2 casualties). Does that seem like a lot to you? Well, not to worry - as DICE representative Gordon Van Dyke said in a post on the EA Forums, players were already a good portion of the way there: There had been over 5 million kills made on the first day alone!

This, of course, not only makes the release of Battlefield 1943 the most deadly single day in human history, it outstrips the previous record-holder for the bloodiest battle of all time - the Battle of Stalingrad, which claimed a (comparatively) meagerly 2 million lives. And that was over the better part of a year!

It isn't clear whether Van Dyke was referring to just kills made over Xbox Live, or if the total included both the Xbox 360 and PS3 versions of the game, but he revealed another impressive number: "On Day 1 there were 29.45 years of gameplay completed on Xbox 360." Yeah, that's a lot.

Through clever application of those math-type things, MTV Multiplayer calculated that the Xbox 360 would unlock the Coral Sea in two weeks (next Friday, to be precise) with the PS3 following a week later.

Also, keep in mind that these numbers are high despite server issues that left many would-be soldiers unable to log on and play. So really, the numbers could very well have been even higher.

It makes one wonder how WW2 would have gone if there were a respawn feature in real life.