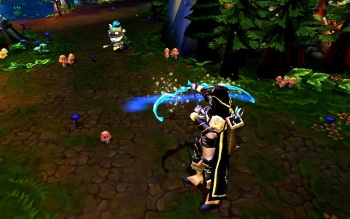 Riot Games' Defense of the Ancients-style RTS League of Legends will adopt a free-to-play model supported by microtransactions, the developer announced today.

League of Legends takes after Defense of the Ancients AllStars, the hero-oriented competitive RTS that still commands a strong following worldwide (and even has an official song). As a DotA-inspired title, League of Legends faces stiff competition not just from the other "DotA clones" on the market today - Heroes of Newerth, Demigod - but DotA itself. After all, why should DotA players pay money for games which, if you were being reductive and a jerk, are basically the same as the one you've been playing for years?

League of Legends' answer to that question is simple: you don't have to. Legends, which is being developed by ex-DotA and Blizzard staff, among others, will use the popular free-to-play model so many MMOGs have adopted recently. The game will be free to download, install, and enjoy, while added bonuses to the game will require players to fork over their hard-earned cash.

"One of our goals at Riot has been to set a high quality bar for core games that are available for free online as we believe that a relentless focus on delivering tremendous value to online communities will earn player loyalty," Brandon Beck, co-founder and CEO, Riot Games, said. "League of Legends is being built as a highly competitive core game that we believe will change many people's minds about the type and caliber of games that can be offered for free."

Riot Games is referring to this system, as it works in League of Legends, as the Summoner system. In the game, players take on the role of "Summoners," who call forth "champions" to fight for them in battle. Players, or, err, Summoners, earn Influence Points by playing the game - you use these points to upgrade your characters, etc. At the same time, you can use real money to buy Riot Points, which will unlock "rare visual customization options."

Riot says this "system is designed to empower the player with a huge number of mechanical choices that deepen the level of strategic thinking in the game."

This Is How We Do It: 9 Differences Between Heroes of the Storm and Other Mobas Rhykker 20 Comments
Comments on