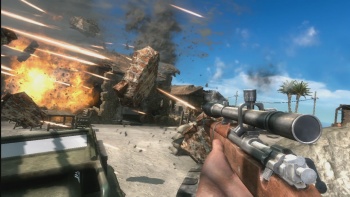 Battlefield 1943 players on Xbox 360 have already reached the 43 million kill count in a matter of days, unlocking a new map and mode for the game. PS3 players, meanwhile, are lagging a bit behind.

I didn't think you guys had it in you, but apparently you are bloodthirsty group of indomitable mother f'ers. In less than a week, Battlefield 1943 players on the Xbox 360 racked up 43 million kills. That's around what conservative estimates peg as the number killed in World War II. It's also the number gamers would have to reach in order to unlock the Coral Sea map and Air Superiority mode for the game.

And so you did it. There were five million slain on the first day alone, but the Coral Sea challenge, didn't officially begin until four days ago. If DICE started counting on the 10th, that means players killed 43 million people in less than four days. That's a goddamn massacre.

The lucky chap who scored the 43 millionth kill was an Xbox Liver by the name of James aka jkasapi from Peterborough, England. For his honorable service, James is the recipient of a 1943 t-shirt, custom Battlefield sneakers, and a pair of 1943 sunglasses. I presume these are clothes for his Avatar, but I could be wrong.

Meanwhile, the PS3 Battlefield community is lagging behind with a comparatively paltry 23 million kills. That's not necessarily a bad thing, though, PS3 owners. It means that some of you still have hearts, that you won't kill in droves in order to unlock a new dogfighting mode. It means, deep down, somewhere inside, you're still human.