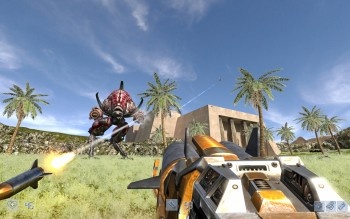 Still looking for your 15 minutes of fame? Croteam and Devolver Digital are holding a Serious Sam HD contest on Twitter that might just be your ticket to immortality.

The re-release of Serious Sam: The First Encounter for Xbox Live Arcade and the PC was announced in late July, an update of the hit 2001 shooter that will feature 12 levels of lushly-rendered action. Also being redone, it turns out, are the many one-liners "Serious" Sam Stone, the game's Duke Nukem-style hero, spits out as he blasts his way through wave after wave of enemies. Included among them will be the winner of the "Serious Tweet" contest that launched today.

The rules are simple. Log on to Twitter and tweet your best snappy zinger or pithy one-liner to @devolverdigital. The contest runs until July 30, at which point the best of the bunch will be chosen and recorded by John J. Dick, the voice of Serious Sam. The winner will also have his name included in the credits.

"We have always admired the love and support fans have shown Croteam and the Serious Sam franchise," said a Devolver Digital representative. "This is a fantastic way to get gamers involved in Serious Sam HD and give our fans a chance to contribute to the game itself."

An overworked, underpaid writer at Croteam revealed another motive behind the contest: If the users write this stuff, he won't have to. "I never get any thanks for the wonderfully poetic and emotionally layered lines I write for Sam 'Serious' Stone," he said. "So guess what? Let someone else take a crack at it and see how hard it is. These witty remarks don't write themselves you know."

Are you more talented than an anonymous Croatian videogame writer, or at least willing to work for even less money? Take your best shot at twitter.com/devolverdigital - and don't forget the little people when fame and fortune strike.

Previews: Shadow Warrior Preview - All the Wang You Can Handle JonB 13 Comments