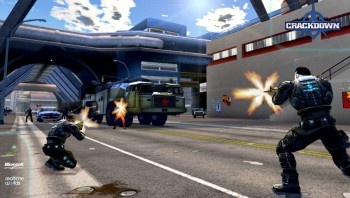 1.5 million copies sounds like a lot but apparently the million-sold mark is no longer the sign of success it once was. Jones said the game was only a break-even proposition for Realtime Worlds and that its less-than-stellar performance was the result of numerous factors, foremost among them being used videogame sales.

"With Crackdown we sold about 1.5 million copies, but even at that we pretty much only managed to break even," he told Gamasutra. "It was due to the amount of factors that were out of our control as the developer, influences such as GameStop's amazing used-game sales; we know 1.5 million new copies were sold, but it's likely there were 2.5, three million sold when you include used."

He admitted that the "problem" with used game sales was one of the factors behind the decision to make Realtime's current project APB an online-only game, although he added that it would also allow the company to create a more immersive, believable environment. "Typically when you build a 'living city' they're a facade; you turn a corner and the cars behind stop existing," he said. "But APB is to feature a real persistent world, as on a server we can offer that. In the world, there's a tremendous amount of life."

I'd like to know where Jones came up with the three million sales figure for Crackdown, particularly since the way he phrases his complaint makes it sound like a bit of a guess. It's a huge leap to say the used games market claimed half your sales, although as Joystiq notes, Microsoft's decision to include a Halo 3 beta invitation with the game undoubtedly distorted the picture. But if gamers who weren't otherwise interested in Crackdown bought it just to get into the Halo beta - which is certainly a safe assumption - and then immediately traded it back, would it not be fair to say that GameStop's trade-in policy, which encourages that sort of thing, actually gave Realtime a piece of the pie it otherwise would not have had?