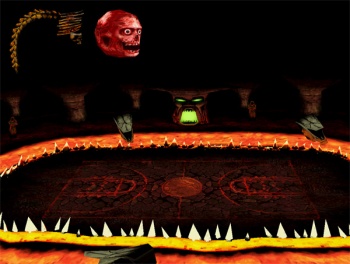 Mortal Kombat creator Ed Boon has revealed a Mortal Kombat-themed "kourt" for arcade classic NBA Jam that never happened because the NBA apparently wasn't into the idea of a basketball court surrounded by lava where the ball is a human head.

The recent downfall of Midway marked the conclusion of a tumultuous, drama-filled and once seemingly neverending saga. Amid all the accusations and legal wrangling, it was easy to forget that Midway once published some really great games, and the NBA Jam/Hangtime series were some of the best.

Karl Malone doing 360 flips from full court and finishing with a dunk that set the ball on fire. Shots worth a dozen points. Those games were ridiculous enough, but they could have been even moreso if Mortal Kombat creator (or, uh, kreator) Ed Boon had gotten approval for his Mortal Kombat "kourt" that was supposed to be featured in home versions of Jam and Hangtime, but never made the cut (or kut as the kase may be).

The court is an island in the middle of a lava pit, bordered on all sides by giant spikes. Open coffins float in the lava, while some hooded guys stand sentry on shore. Sounds pretty gnarly, but get this: the hoop (which is a skull with the top lopped off) and backboard are held up by a gigantic spine, and the basketball is actually a de-skinned human head.

According to Boon, the NBA wasn't having any of this, because the NBA is apparently way too classy to let fans play videogame basketball with a human head. "Would've been fun," Boon lamented. Undoubtedly.