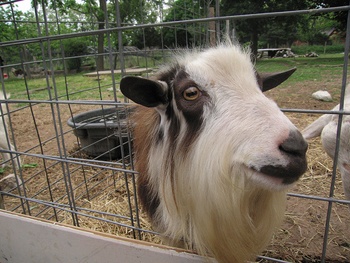 Developers looking to affect players on a deep, emotional level could learn a lot from the goat in King's Quest.

You have two choices when you first encounter the goat, explains Brendan Main in an article in this week's issue of The Escapist: You can entice it to join you by feeding it a carrot, or you can kill it. Though he always vowed to change his ways, Main killed the poor goat each and every time, an act that still bothers him to this day.

It's that lingering guilt that drives Sears to hold up the goat as a symbol of videogame morality:

That goat is set apart from all the faceless enemies I've encountered in countless other games. It does not belong with the scores of passers-by I've mown down, or the hundreds of zombies I've ripped through. It is a symbol of guilt - a moment when I was given a chance to be patient and humane, but settled for the cheap thrill instead.

Given that no game developer seems to have quite gotten a real handle on weaving moral choices into gameplay just yet, perhaps it would be worth their while to revisit King's Quest to see if Sears has a point.

Be sure to check out Issue 211 for the full article, "Kill Billy."