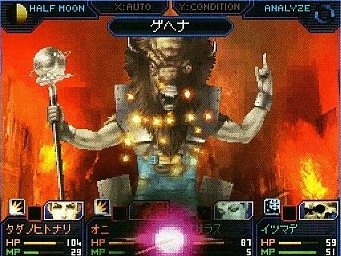 Atlus has taken the wraps off Strange Journey, the newest entry in its Shin Megami Tensei franchise and what looks to be a throwback to the MegaTen games of old.

Atlus' Shin Megami Tensei franchise has seen a huge spike in popularity from its previous cult status with the success of the Persona sub-series, but "MegaTen" traditionalists have been hard-pressed for a SMT experience proper in the years since the third game in the main series, Nocturne, appeared in 2004.

That wait looks to be finally over with the announcement of Shin Megami Tensei: Strange Journey's DS release this fall in Japan. Whether or not this figures as an entry in the main franchise isn't totally clear (though apparently in Japan they only stick the SMT title on main series games), but it certainly has all the hallmarks of what one would expect from Shin Megami Tensei 4: first-person dungeon crawling, demon collection and fusion, and a bizarre and surreal scenario.

Yeah, the story's a bit weird. You play as a member of some elite crew sent to explore a dimensional rift on the South Pole that leads to something called the "Schwartz-verse" (Spaceballs reference?) and in your explorations will encounter, uh, giant minotaurs and have to recruit demons to assist you in battle. Those demons will number around 300, the most ever seen in a SMT game, and can be recruited via negotiation (no silly card matching here, Persona fans) and fused to make new monsters as always.

One thing that's new here is that demons and party members can do special co-op attacks, in addition to all the elemental weakness exploiting that's a central part of most SMT battle systems. The other thing that so far seems novel about Strange Journey is the Dead Space-esque suit your character wears, which seems to be upgradeable and customizable in interesting ways.

Finally, just about all the key names in SMT development are here: Kazumo Kaneko, whose visual style has defined the series, is handling the art, Eiji Ishida, who worked on Nocturne and the Devil Summoner games, is directing, and Shoji Meguro, Atlus composer supreme, is writing the music.

The Strange Journey teaser site goes live next week, so hopefully we'll get more concrete info then. So far it's only been announced for a Japanese release in October, but I suspect Atlus USA won't be shy about bringing this over (maybe next spring?), considering that they're wiling to publish almost anything these days, no matter how outlandish the name.

Escapist Podcast: Is Photorealism Needed for Gaming to Advance? The Escapist Staff 55 Comments
Comments on