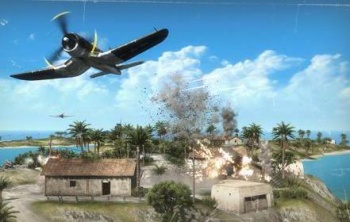 We already knew there were lots of people playing Battlefield 1943. First, it was the game's success that crippled it out of the gate with server issues and lag. After the server problems were fixed, though, we began to see exactly how many people were playing the game: A whopping five million kills were scored on the first day alone, and Xbox owners had amassed a whopping 43 million kills within less than a week, unlocking the Coral Sea map. That's as many deaths as conservative estimates attribute to the entirety of World War II.

So yeah, we knew that BF1943 was popular. How popular? The most popular, actually - EA DICE announced that the game had sold over 600,000 copies on Xbox Live and the PlayStation Network since its launch on July 8th, making it the fastest-selling download-only title of, well, all time.

While the game was undoubtedly bolstered by critical acclaim and the power of the Battlefield brand name, there was another selling point - at just $15 a pop, it's pretty damn affordable. With the economy what it is, getting a fun multiplayer experience for less than twenty USD is a pretty good deal, and the sales of the game reflect that.

The full press release is below:

"We are honoured by the reception that the game has received so far," says Gordon Van Dyke, Producer on Battlefield 1943. "Watching and participating in this non-stop multiplayer action has been a real treat for us and we can't believe how fast our fans reached 43 million kills. We can now truly say that we have set a new standard for what can be done in the downloadable games category and gamers recognize the endless value that Battlefield 1943 provides for just $15."

Battlefield 1943 is an all-new download-only multiplayer action game that brings DICE's first-class WWII action to gamers. The game introduces two thrilling modes where 24 players can compete across four classic WWII Battlefield maps: Wake Island, Guadalcanal, Iwo Jima and Coral Sea. These maps are inspired by the award winning Battlefield 1942™ game, and have been redesigned and reengineered from the ground up using the DICE Frostbite™ engine allowing players to wreak havoc and destruction via land, sea or air.