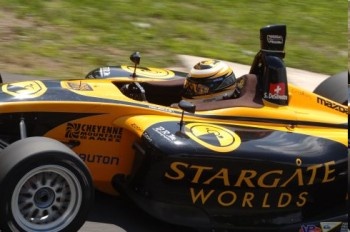 The final days may be counting down for Stargate Worlds, the troubled MMOG that is somehow still kicking despite ongoing financial troubles that began all the way back in 2008.

After spending the better part of a year struggling for funding and watching its development team slowly drift away, the end could be looming for Stargate Worlds. A former employee of publisher FireSky, who left the company "recently," told MMORPG.com that its contract with MGM stipulates that it will lose its license to develop the game if new funding isn't in place by August 1.

That date is rapidly approaching and according to the report, the "last hope" for a cash infusion apparently lies with a group of doctors who are considering investing $8 million into the company. That would be sufficient to pay off outstanding wages and get the game launched; unfortunately, the ex-employee said he doesn't think it's likely the deal will be done in time.

Shane Hensley of FireSky denied the claim, however, saying that while MGM "isn't thrilled" with the way things have worked out so far, there's no indication that they plan on pulling the license on any particular date. He also suggested that some members of the team have sunk their own money into the project to keep it afloat. "The struggle has been more than most could bear, but there are a few here who have independent means or significant personal investment who have been able to ride it out," he said.

Stargate Worlds was announced in early 2006 but trouble was revealed in December 2008 when it came to light that employees hadn't been paid for almost a month. Stargate Worlds developer Cheyenne Mountain was sued over unpaid bills in March of this year and a month later Stargate: SG1 producer Brad Wright implied that the game was down for the count, saying all the work that had gone into the game had been "wasted." FireSky responded quickly to those remarks, issuing a statement saying, "The lights here are still on and the development team is working hard every day to get this game built." But although the developer began taking applications for a beta program at the end of April, there has been no visible change in the game's fortunes.

Oddly for a company having such a hard time making ends meet, Stargate Worlds is also the primary sponsor of a two-car team in the Atlantic Championship racing series, with drivers including 2008 Series Champion and current points leader Simona de Silvestro and former child star Frankie Muniz. I have no idea how much something like that costs but it can't be cheap.

Hensley admitted that while nothing specific is in the works, the situation as it is can't go on forever. "I doubt this will last much longer," he added, "but those who are here currently are amazingly dedicated and continue to make progress on our projects despite the circumstances."

Can the MMOG That Refused To Die continue to hang on? We'll find out in a week!