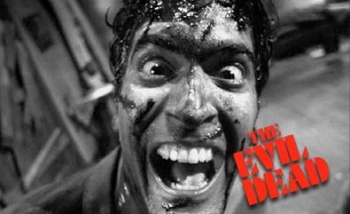 With director Sam Raimi officially tied to the Warcraft movie, the question is not "will Bruce Campbell be in the film," but rather, "who will he play?"

Okay, okay. It's true that Bruce Campbell - perhaps best known for his work as Ash Williams in the Evil Dead series - hasn't been in every movie Sam Raimi has directed, but... well, look at their respective lists, and you'll find that it's pretty close.

So with Raimi tapped to helm the upcoming feature film set in the world of Blizzard's popular Warcraft series, the question being bandied around at Blizzard's Irvine, CA headquarters seems to be a matter of wondering just who the cult-film icon will play. At least, that's what VP of creative development Chris Metzen said during the Warcraft "Epic Loot" panel at Comic-Con.

"I keep thinking [Campbell] might make a killer Goblin," said Metzen, "He's got a kick ass chin." In all seriousness, though Campbell might be a bit tall to play one of the pint-sized Warcraft Goblins, Metzen mentioned that he could see the actor in a CGI role, a la Andy Serkis' turn as Gollum in Peter Jackson's Lord of the Rings trilogy.

Metzen was apparently unable to comment further on the upcoming film other than mentioning that the PC powerhouse had been "prepping all engines to rock." While we can't - and shouldn't - take Raimi's involvement or even Metzen's comments as a gospel promise that Campbell will be attached to the product, we can hope and dream, right?

Many people who have played Warcraft III may remember the Dwarven Mortar Team's shoutout to Campbell's famous "This is my boomstick!" line, so there's my vote: Bruce Campbell should play a Dwarven mortar team. By himself.

Either that, or High Overlord Saurfang.

(Edit: Whoops. That was the Dwarven Rifleman, not the Mortar Team.)