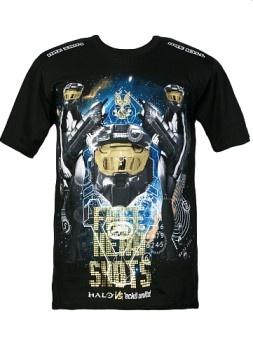 Marc Ecko has released a line of Halo t-shirts that are a perfect wardrobe upgrade for people whose dress-up clothes include anything with the words "Austin 3:16" on them.

I'm not ashamed to admit it: I'm a man of many t-shirts. Most of them feature the words "World Tour 19xx" somewhere but I have many others relating to different matters of similar cultural import. I'm particularly proud of my gaming-related t-shirts, including the Half-Life 2 collector's edition shirt I got screwed out of 100 bucks for and the Baldur's Gate 2 shirt EB coughed up for screwing up my preorder. Yes, I've worn a lot of t-shirts in my time, but you'd never catch me dead in one of these new Halo shirts from Marc Ecko.

Look at these things. These are six of the most horridly tasteless, vulgar t-shirts ever conceived by a human brain. They look like something put together by a sugared-up 12-year-old joining his first "Design Your Own T-Shirt" contest. And here's the best part: The opportunity to wear one of these monstrosities will cost you as much as 38 bucks.

One things's for sure: You leave the house sporting one of these babies and nobody who sees you will have any doubt that you're a big Halo fan. They'll also wonder who decided to let you dress yourself before going out in public.