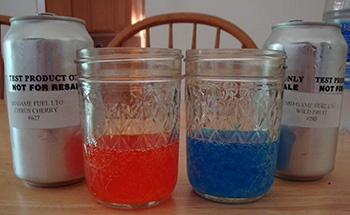 When presented with two unmarked cans of World of Warcraft-flavored soda, there's really only one thing to do: SCIENCE!

Sadly, once the drinks had winged their way to my house and into my gullet, that glee eroded almost as quickly as the enamel coating my incisors.

We'll get to that in a second though. First, a bit of history.

Seeing as both flavors are tangentially related to gaming and I cover games for a living, Mtn Dew reached out to me recently to gauge my interest in reviewing the beverages. Being a sucker for all things World of Warcraft -- don't get me started on the number of rare in-game pets I own -- I eagerly signed on, forgetting momentarily that I gave up caffeinated drinks of the day-glo variety years ago.

Moments ago I finished drinking a can of each flavor and while I'd like to offer a solid argument for why I gave up soft drinks all those years ago, I'm gripped by a sudden urge to clean all the bathrooms in my house. Afterward, you'll get a review of each. Thank god I took notes before my hands started shaking.

Remembering high school biology, I attempted to apply as much of the scientific method as possible to what would otherwise be a simple taste test. Before actually drinking the two beverages I designed what I thought would be a simple yet effective comparison test. After pouring a cup of each beverage into equally anachronistic jars, I also set up a palate cleanser in the form of a bottle of Aquafina water. In between each drink I'd pause for fifteen minutes, drink roughly half a bottle of the Aquafina to cleanse my palate, then ingest the other. The idea was that the plain water would clear away any lingering taste from the first beverage, thus offering the second beverage a clear set of taste buds on which to wreak its sugary havoc.

Going by least appalling color, I first attempted to drink the red option, or as Mtn Dew calls it, Mountain Dew Game Fuel Horde Red. Attempting to closely mimic a pretentious wine snob I first sniffed the drink, making sure to keep my pinky raised daintily while lifting the wholly lowbrow jar I'd lifted from my roommates stash of makeshift shotglasses. The juxtaposition of pretentious pinky action with both the caffeinated drink and the stupid jar was enough to make me almost giggle before I actually caught a whiff of the drink's ... what's the word? Bouquet? Yes. The drink's bouquet.

Mountain Dew Game Fuel Horde Red does not smell like a drink. It does not even smell like a fluid. If I had to draw a comparison familiar to those with the caffeine monkey on their backs I'd say it's a combination of Sweetarts candy, pine needles, and Pixie Stix. The scent is almost a warning to your sinuses that what you are about to put into your body intends to scorch your insides like William Tecumseh Sherman on a sightseeing tour of Turner Field.

At this point I nearly set the jar down and walked away, but since my roommate and his girlfriend were staring at me intently -- no doubt wondering exactly how I scored a job that entailed drinking the liquid embodiment of combustive neon -- I gave into peer pressure. I took a drink.

As if to taunt my senses Horde Red Game Fuel tastes nothing like its color would suggest. When you look at it you imagine an orange flavor or perhaps a cherry flavor if you squint and turn your head sideways. What you actually get though is a combination my notes describe as "SUGARRRRR!!!!!" followed by a simple equation of "80% lemon + 15% cherry + 5% pine needles = The antithesis of anything natural."

Despite my notes' seeming confusion and rage over the experience I wasn't entirely put off by the drink, and could definitely see caffeine fans enjoying the stuff while slogging through the wilds of Azeroth.

That was before the aftertaste.

It's one thing to have a drink so proud of its flavor that it seeks to remind you that you drank it for moments after you've actually swallowed the fluid, and it's something else entirely for a beverage to cling to every organic surface in your mouth like an unfit mother terrified that you're here to snatch her babies from her. 15 minutes and a half bottle of water later I finally got the taste out of my mouth, but I remain wary that at any moment I might burp and resurrect the angry ghost of a thousand fluorescent red orcs.

Somewhat cautiously I peered down at my second drink, the Mountain Dew Game Fuel Alliance Blue. Remembering my fondness for all things sugary and azure, I said a short prayer to St. Joe of Bazooka (the patron saint of flavors) and lifted the second jar to my nose.

"Hm," I said to absolutely no one, "this almost smells like ... like ... blue? Yes! This smells like blue!" Realizing I should probably offer a better comparison for those non-synaesthestetics in the audience, I quickly jotted down that the smell reminded me of all those blue candies and frozen treats I loved as a kid. Blue Otter Pops, blue Blow Pops, blue popsicles -- anything blue and sugary has a distinct smell and flavor that our American diet of junk food has ingrained in anyone whose parents weren't of the patchouli and granola set. Hoping this scent might bode well for the drink's flavor, I cautiously drained the jar into my mouth.

Though Alliance Blue shares the sharp initial bite of Horde Red, it fades much more quickly than the latter into something akin to slightly tart blue Kool-Aid. You can definitely taste the Mtn Dew influence in Alliance Blue much more distinctly than in Horde Red and in a surprising twist the former has much less of an aftertaste than its ruby counterpart. Despite my aversion to caffeinated novelty drinks I actually slightly enjoyed this version of the Game Fuel and would recommend it to anyone with a compulsion toward these sorts of marketing gimmicks.

Realistically, if you're the sort of person who drinks Mtn Dew on a regular basis, these beverages are going to appeal to you, if only to try something new and different. Though I was off put by the almost aggressively sugary drinks, regular caffeine junkies will have no problem enjoying the two Game Fuel flavors and those hardcore World of Warcraft fiends have already shelled out cash for much less practical, much more expensive promotional tie-ins -- again, I've got way too many baby polar bears and baby Murlocs clogging my WoW account.

Given how terribly wrong some soft drink experiments have gone in the past -- Crystal Pepsi, I'm looking at you -- Mountain Dew Game Fuel is, at best, an enjoyable diversion, and at worst, isn't entirely offensive.