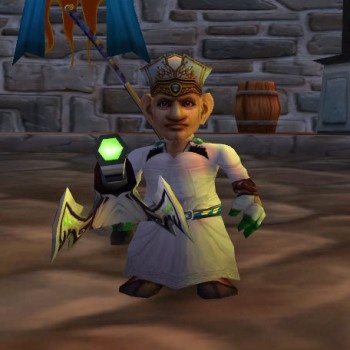 A U.K. psychiatrist wants to begin offering treatment to kids addicted to World of Warcraft from within the game itself.

Youngsters addicted to World of Warcraft get so caught up in it that they sometimes play as much as 16 hours a day, neglecting school, social activities and other aspects of their life not directly associated with the game. Yet those most affected by the game don't exhibit conventional warning signs, said psychiatrist Dr. Richard Graham, and as a result traditional approaches to intervention and treatment won't work.

The solution? Treat them from within the game. Graham wants to begin providing in-game therapy to WoW-addicted kids by the end of the year. "It's already clear that psychiatrists will have to stay within the parameters of the game. They certainly wouldn't be wandering around the game in white coats and would have to use the same characters available to other players," he said.

"Of course one problem we're going to have to overcome is that while a psychiatrist may excel in what they do in the real world, they're probably not going to be very good at playing World of Warcraft," he added. "We may have to work at that if we are going to get through to those who play this game for hours at end."

The doctor called on Blizzard to "waive or discount" fees for psychiatrists and therapists who play the game so they can "more easily communicate with at-risk players in their preferred environment." He also suggested that therapists might recruit existing players with a greater knowledge of the game to serve as "peer mentors," helping to identify addicted users and facilitate their decision to seek help.

"Those affected don't exhibit the same outward warning signs as most teenage anti-social behavior issues do because they're in their bedrooms most of the time, seemingly out of trouble," he said. "Because of this we can't get through to them in the traditional educational environment or intrude on their actual bedrooms. We need to turn to the internet itself to tackle these problems."