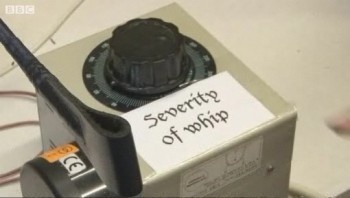 A U.K. man has invented a "boot fetish Pong game" that's controlled by groping a knee-high stiletto boot - and that punishes you whenever you lose a point.

James Larsson looks normal enough but hidden deep beneath his calm, rational, pleasantly-accented exterior beats the heart of a raving mad scientist. As shown in a recent BBC video report, Larsson's inventive ways have led him to build an automatic cat food dispenser out of a VCR and a meat grinder, an electronic (and dangerous) Conkers game made of lightbulbs and a pair of headphones and an even more dangerous "steady hands" game that involves loops of metal and 20,000 volts.

But most interesting of all is his boot fetish game controller, a leather-and-electronics contraption that lets gamers indulge two dubious pastimes at once. The boots are connected to an old Pong game; players control the game by "groping and fondling" them in different spots in order to move the paddles up and down. For a little added kink, the device punishes players with a leather whip each time they lose a point. It even includes a "severity of whip" control to ensure that nobody gets spanked too hard - or not hard enough.

What do you say about something like this? The design is very rudimentary but with some further development and fine-tuning, I could see the boot fetish controller leading the way to the next generation of immersive force-feedback controllers. As for Larsson himself, I would never presume to judge someone based on an internet video alone, but I suspect the reporter was on to something when she said, "You look like you're enjoying this a bit too much."

Using the Power of My Mind Russ Pitts 0 Comments