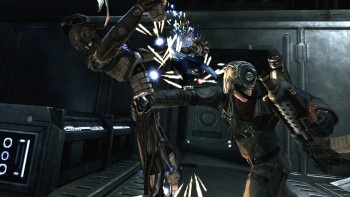 Yet another high profile fall release is being delayed into 2010, with Capcom announcing that AirTight Games' Dark Void is slipping into the first quarter of next year.

This is starting to get ridiculous. Following on the heels of BioShock 2, Red Steel 2, Bayonetta, Splinter Cell Conviction, and, I don't know, a whole lot of other games people were looking forward to playing this fall, Capcom has announced that they're pushing back the release of Dark Void from this September to the first quarter of 2010, meaning any time between January and March next year.

According to Capcom's Chris Kramer, the delay was decided upon "in order to get the game out of the crowded fall game season," which would make sense if half the games that were supposed to crowd this fall game season were still coming out this fall and not in, I don't know, Q1 2010.

The move may have had something to do specifically with the release of a rival heavy hitter, according to Kramer. "The move will be great for the game and for gamers: less competition in the market (curse you, Halo!), more time for polish," he told Joystiq. Dark Void and Halo 3: ODST were previously scheduled for the same release date, which could have spelled bad news for a brand-new IP debuting on the same day as the latest and greatest from one of the biggest franchises in entertainment.

So yeah, maybe moving the release date was a smart thing to do on Capcom's part. But all the way to next year? That's just cruel.

We've dropped a line at AirTight Games to get their take on the delay - we'll let you know if we hear anything juicy.