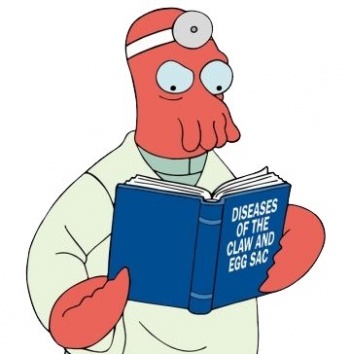 It's okay. Calm down. Stop mashing that gigantic red button and screaming apocalypse. Crisis has been averted as Fox and the cast of Futurama have signed a new contract ensuring that all your favorite voice actors will be on the show when it returns. Dr. Zoidberg will still sound like Dr. Zoidberg. Bender will be Marcus Fenix. Hermes will be, uh, whoever voices Hermes. Oh, it's Phil LaMarr. That guy.

Turns out that all they needed to navigate those tricky contract negotiations is what anyone needs when two parties are trying to get what they want and will refuse anything less: compromise. Fox is paying more than what they want to, and the actors are accepting less. Everybody gets what they want, and some of what they don't.

Fox was already in the midst of a casting call for new actors earlier this month, and seemingly committed to replacing the old cast. Something must have made them reconsider to the point where they'd sit back down at the negotiation table. Maybe it was the unquenchable fan uproar, maybe it was something else. Whatever it was, it doesn't matter. Futurama, as we know it, has been saved.

[Via The Toronto Star]

No Right Explanation: Dr. Who Will Be Performing Your Surgery Today Firefilm 17 Comments