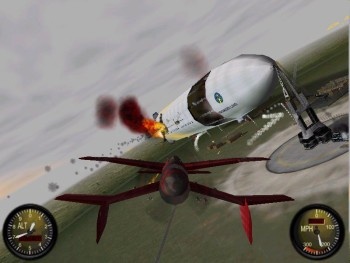 Crimson Skies first appeared on the PC in 2000, set in an alternate-timeline 1930s in which the United States has broken up into numerous smaller nations that are almost constantly at war. In this world, airborne freebooters cross the skies in giant, aircraft-carrying zeppelins, battling for fame and fortune on the backs of fantastical, piston-driven planes. But in spite of its joystick jockey veneer, the game's flight model was extremely relaxed and simplified; Crimson Skies was far more Afterburner than Falcon.

An Xbox version, Crimson Skies: High Road to Revenge, was released in 2003, while an Xbox Originals version for the Xbox 360 came in 2007. For all practical purposes, however, the franchise had been dormant for years and Microsoft's decision to pull the plug on Fasa Interative in 2007 looked to be the final nail in the coffin.

But not if Fasa founder Jordan Weisman has his way. Weisman's new company, Smith & Tinker, has licensed the rights to various Fasa properties from Microsoft, including Crimson Skies. "I wanted to start with Mechwarrior, because it really struck me as the one that had the largest existing fan base and it had been the longest since a Mechwarrior title was done right," he told GameSpot, referring to the recent announcement of the Mechwarrior franchise reboot.

"In the wee hours of the night, I spend time thinking about the older properties," he continued. "I think Crimson Skies is something we'd love to get some energy around, and we have some devious plans - we'll see if those materialize."

There is one Fasa title that gamers shouldn't expect to see re-emerge anytime soon, however: The less-fondly-remembered RPG-inspired shooter Shadowrun. "Shadowrun was recently... not treated well, shall we say, so the thought was, let a little time pass before approaching that one again," Weisman added.

First Mechwarrior, now Crimson Skies? I think Jordan Weisman may be on his way to becoming my favorite person of the year.