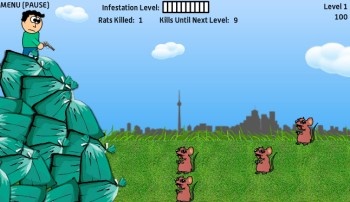 Toronto's recently ended garbage strike, which sadly ended after only 39 days of not-nearly-hot-enough weather, has been immortalized in a new online Flash game called Trash Wars.

Toronto, the largest and most hated city in Canada, had been wriggling in the slimy grip of a garbage strike that began in mid-June and didn't end until July 31. Toronto's 1100 well-paid garbagemen walked off the job as part of a larger workers strike, leaving the city struggling to deal with a rise tide of choking, rancid filth that had at least one observer saying he "[hoped] that blighted scuzzpit of oblivious, self-centered jackholes drowns in it."

Anyway, one enterprising fellow decided to make the best of it: Hafiz Kassam, owner of Flash game studio Q-Kmbr Games, has launched Trash Wars, a simple little action game in which players take up watch over a gigantic mound of trash and shoot rats to keep the infestation level down.

"It just popped into my head," Kassam told the Toronto Star. "I have made games in the past... just for the sake of making them, but I wanted to (release) something for the mainstream public - something with a message versus just a game." He said he kept Trash Wars very basic in order to make it accessible "for people who don't play videogames that often," but noted that he might put out a more complex version in the future.

Interestingly, a poll on the game site indicates that over 1100 visitors were "against" the strike, while just over 300 supported it and just under 300 were entirely indifferent. The strike was particularly polarizing not just because it left the city buried in heaps of fetid trash, but because the striking workers are already well-compensated for their efforts and enjoy generous holidays and other contract provisions. The union's demand for more at a time of high unemployment and economic uncertainty appears to have robbed it of much of the public support it has previously claimed.

I managed to rack up a high score of 8,350 on hard mode; I probably could have done better but I had to fight my gut instinct to let the rats into the makeshift dumps so they could work their magic and hopefully displace the city's human population and ultimately turn Toronto into a literal city of disease-carrying vermin, rather than just a figurative one. Hey, at least there'd be less jerks.