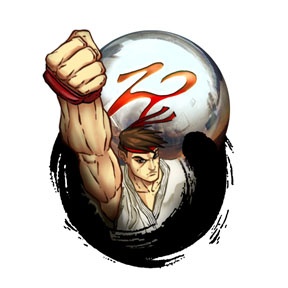 Hungarian software company ZEN Studios has blasted out a teaser image featuring Street Fighter's Ryu in front of a... shiny sphere of some sort.

When we received the image you see to the right, we were... well, a bit puzzled to be honest. All we knew was that Budapest-based ZEN Studios was apparently teasing an upcoming announcement to be made tomorrow via the PlayStation Blog, and beyond that, we could only guess.

The strange thing, of course, is that the figure is unmistakably Street Fighter's Ryu - so one might assume that this would be a project involving Capcom. But as for that silvery orb behind him? Well, that could be anything. So, I asked around Chez Escape to get a few opinions.

Susan Arendt: Ryu and friends go golfing, of course. (Alternatively: Ryu discovers that he's a werewolf and must fight to resist the power of the full moon)

Jordan Deam: You remember that old 90s game Crossfire? Yeah, it's going to be that.

sprout: It's a cue ball. So, Street Fighter Billiards.

I'd thrown my hat in with Hungry Hungry Hondas myself - but then on a whim, I checked out the official website, and not only has ZEN Studios made more than a few pinball titles before, that is, in fact, the exact logo for Zen Pinball.

So, there you go. Street Fighter pinball. We're not totally ruling out the possibility of hitting the links with M.Bison and Ken, but that might just be coming later.