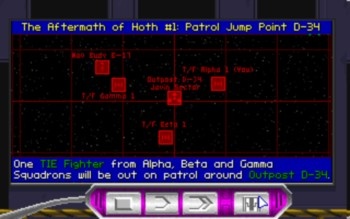 LucasArts has dropped a hint that X-Wing and TIE Fighter, two of the finest space combat sims ever made, could be staging a comeback.

Back in the early 90s, when DOS was king and Star Wars games still had a certain cachet about them, LucasArts put out two space combat simulators that would set a standard for the genre that very few games have ever been able to approach, much less exceed. X-Wing came first in 1993, followed in '94 by the even more excellent TIE Fighter, which was remarkable not only as a space sim but also for the way it was able to portray the Empire and its soldiers and pilots in a sympathetic light without turning everything laughably emo.

But there's been precious little since. The decent X-Wing vs. TIE Fighter came out in 1997 but failed to catch on with fans because of its nearly-complete lack of single-player support; X-Wing Alliance, launched two years later, was more warmly received but for one reason or another it marked the end of the Stars Wars space combat sims.

But maybe not forever. Based on the apparent success of the Monkey Island rejuventation, G4tv.com asked LucasArts President Darrell Rodriguez what he thought about the possibility of a similar treatment for the storied starfighter games. Surprisingly, Rodriguez did not dismiss the question outright but instead hinted that plans could already be in the works.

"We don't have any announcements now, but stay tuned," he said. "We will soon..."

Ominous - just like that guy from the Emperor's Inner Circle who wants you to do all that weird stuff while you're out fighting the Rebellion. But it's also very promising, if there's any truth to it. Redoing the Monkey Island games is great but it's the thought of hopping back into the cockpit of an X-Wing or TIE Fighter that really gets my joystick swinging. You can bet we'll be keeping an eye on this one.