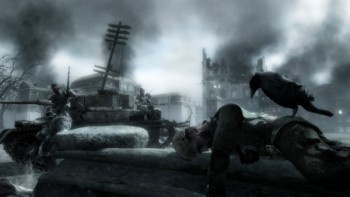 The third map pack for Call of Duty: World at War, which features four new maps including a new Nazi Zombies area, is now available on Xbox Live and PlayStation Network.

If you still haven't had enough of Treyarch's last Call of Duty game (I know you kids love your Nazi Zombies mode), the developer has released some brand new content in the form of their third map pack, available as of right now on your preferred console-specific online gaming service. By that I mean Xbox Live or PSN.

There are three regular maps and one Nazi Zombies map included here. The plain Jane maps include Battery, which is an armored island designed for close quarters combat, Revolution, a sniper-friendly arena in a Russian city, and Breach, set in the streets of Berlin.

Of course the biggest attraction for quite a few folks will likely be the new Zombies map, Der Reise, which apparently translates to "The Giant." The map is set at a secret Nazi research facility that's packed with all sorts of weird and bizarre stuff, including teleporters and a machine that automatically upgrades your weapons with a single button press. There's also something scary called the "Wunderwaffe DG-2" and new Achievements/Trophies.

I've never been much of a fan of World at War, but judging from the weekly Xbox Live stats, there are plenty of people who are. The map pack is available now for 800 Microsoft Points or $9.99.