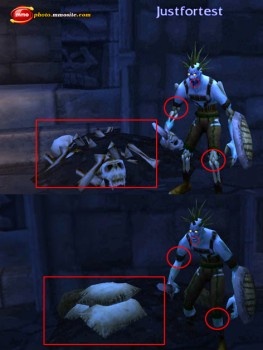 The Chinese relaunch of World of Warcraft continues to move ahead but a number of government-mandated changes have left the game looking a little bit different than gamers might remember.

China's always been a bit iffy on World of Warcraft, largely due to the prevalence of skeletal undead in the game. The launch of The Burning Crusade expansion in 2007 attracted unusual levels of government scrutiny and ultimately delayed its debut in China, while Wrath of the Lich King was blocked outright for failing to meet requirements.

Things got even uglier when Blizzard chose not to renew its contract with Chinese operator The9 and opted to go with NetEase instead, which resulted in the game going offline for almost two months. It's back now and should be wrapping up a week long closed beta by the time you read this, but returning players will notice that a few changes have been made to satisfy those government requirements.

First and foremost, reflecting the well-established Chinese dislike of skeletal remains, piles of bones scattered throughout the game have been replaced with piles of sandbags. Blood has also been changed from red to black, prompting at least one Chinese player to joke that it looks like oil, which would make it far too valuable to waste through wanton hacking and slashing. Less visible are the modifications to talent tree icons that featured skulls, severed heads and blood, which have been turned into boxes.

Earlier changes to undead characters, which were "re-fleshed" to hide exposed bone, also remain in place. Yet despite all that, I'd be willing to bet that Chinese gamers - not to mention NetEase and Blizzard - will be too happy to have World of Warcraft back to care very much about the cuts. No word yet on when the game will be fully re-opened to the public.