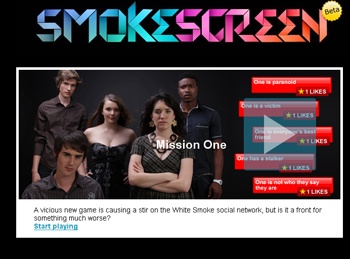 Your friends have been urging you to join this hot social networking site they all adore, and you've finally given in and decided to sign up. You dutifully fill out your vital information like name and email address, pick a password and click the registration button. Now stop and think - who now has that data? What are they going to do with it? How can they use it to hurt you?

Those are the kinds of questions that Adrian Hon, creator of the upcoming game Smokescreen, would like you to think about when you're online. Of course, if he just waggled his finger at you and spoke in chiding tones like a concerned parent, you'd likely tune him out completely, so instead, he's going to tell you a story. And given his background, you can bet it's going to be a good one.

Though he and his brother Dan have gone on to win awards with their entertainment production company, Six to Start, the Hons are perhaps best known for their work on Perplex City, an alternate reality game that attracted a fiercely loyal following. Perplex City was a huge, sprawling affair, weaving together puzzle cards, real-world events, podcasts, blogs, and emails, but at its heart was an intricate and intriguing mystery. Though the game is much smaller in scale, "Smokescreen has a great story, just like Perplex City. We spent a long time working on it, because a good story is something that can really elevate a game and make it memorable," says Hon.

"I think videogames are as capable of great storytelling as any other medium," Hon continues. "There are incredible stories in books, on the radio, in films, and on TV; stories that are incredibly powerful and moving, that change your life and that you remember even years later." More videogames aren't telling good stories now, says Hon, because they simply don't have to.

"I'm not convinced that we've really cracked the art of great storytelling in videogames, partly because there are so many different types of games, and because a game doesn't need a good story to sell millions, any more than a movie needs a good story to become a blockbuster (hello, Transformers 2!). But as the gaming audience changes and expands, I think there'll be more demand for games with good stories, and I think there'll be ambitious designers who want to create games that are fun, appealing, and have great stories," he says.

Smokescreen, which launches September 3rd, tells the story of a group of friends who hang out on White Smoke, a social networking site. The game begins when you join them, and quickly has you sifting through various sorts of online information to follow the threads of the plot. It's an innovative way to educate players about issues like online privacy and security, and a very entertaining one.

"The biggest goal was to simulate a range of interesting and tricky scenarios about trust, privacy, etc, that happen online," says Hon. "At the same time, we don't want to fearmonger. There's no question that the characters in Smokescreen are the better for being online, but we've all been trolled, bullied, flamed, or scammed online (or at least, I have!), and a game is a great way - maybe the only way - of getting people to think about these things in a personal way."

Getting the information across is the easy part. "The tricky part," explains Hon, "is making all of this both fun and realistic. It needs to be fun, because otherwise people won't play it. It needs to be realistic, otherwise people won't think it applies to them. So unlike BioShock, we can't pretend that you can hack into a security camera by playing Pipe Dream. Instead, we've had to think about how you would actually hack in to a security camera in real life - and you know, that can be pretty fun."

Six to Start came through with the fun, but at the end of the day, Smokescreen is meant to be thought-provoking and educational. When you're finished playing, Hon wants you to have been entertained, yes, but also to be thinking, "'Huh, maybe I should get around to change my password to something more secure than 'password' after all,' or 'Actually, password retrieval questions like "What's your mother's maiden name?" are really insecure and I should just type in a random string of characters there.'"

Sounds like good advice. Now if you'll excuse me, I have to go change my passwords.