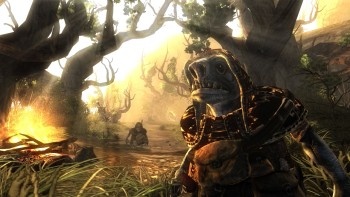 Risen, the upcoming RPG from Gothic developer Piranha Bytes, has been refused classification in Australia and thus will not be available for sale in the country.

Risen is the third title of 2009 to be slapped with the dreaded "RC" by the Australian Classification Board, the agency that assigns ratings to films, publications and videogames in the country. The game joins the FPS Necrovision and the WiiWare game Sexy Poker on the list of games banned down under this year.

The Classification website doesn't provide details as to why the game was banned but Refused-Classification.com says its combination of "sex and drug content" is the most likely reason. According to the ESRB, which has given Risen an M (Mature) rating in North America, "Players can interact with prostitutes (referred to as 'whores' in the game) at a local brothel... Many of the characters in the game smoke a fictional drug called 'brugleweed.' The 'wood reefer' plant is described as having a mild relaxing effect on users, and can be bought, sold, and used by players." The in-game sex, the ESRB notes, "is strongly implied, but never depicted on screen."

Risen is noteworthy as the first game to come from Piranha Bytes, the developer of the acclaimed Gothic series of RPGs, since its split with publisher JoWood in 2007. Fortunately for Australian RPG fans, the Classification Board's decision isn't necessarily the end of the story: Several previous games which have been refused classification, including Necrovision, were cleared for sale in the country once the offending content was edited to the satisfaction of the censors.

Risen is slated for worldwide release (except Australia!) on October 2 for the PC and Xbox 360.