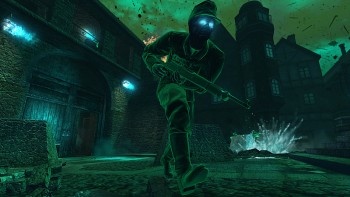 Raven Lead Designer Manveer Heir has thrown down the gauntlet: If Wolfenstein outsells Madden NFL 10 in August, he'll pay for your copy.

You read that right. If Wolfenstein rings up better sales than the new Madden title in the month of August, it's free games for everybody. It's an audacious gamble, made only slightly less so by the fact that there's no way in hell Wolfenstein is going to surpass the mighty Madden machine on the charts. Heir made the declaration on his Twitter feed and he's asking people to spread the word.

The rules continue to evolve as people become aware of his daring declaration but they remain relatively simple. The winner will be based on North American sales as determined by the NPD Group, but anyone from any country can be reimbursed. To get Manveer Heir's money, you'll have to follow him on Twitter and provide a copy of your receipt, and of course there is a limit of one per customer.

Realistically speaking, Heir is at greater risk of being hit by a bus on his way home from work tonight than of having to shell out for a few thousand copies of Wolfenstein. But full credit to the man for coming up with a genuinely new way to draw attention to the game. Madden NFL 10 is a perfect opponent for this kind of virtual grudge match: So wildly successful that it's safe, yet at the same time so widely derided that an awful lot of gamers would probably get a giggle out of seeing it trounced by a shooter.

And who knows? Wolfenstein might even win! The fun begins when both games hit store shelves on August 18.