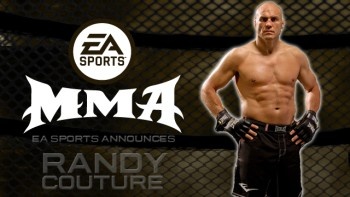 UFC legend Randy "The Natural" Couture has signed to co-headline EA Sports MMA, a deal that will no doubt result in even more F-bombs than usual the next time UFC President Dana White holds a press conference.

Couture, a 16-9 heavyweight, is the only five-time champion in UFC history and is one of the most well-known and popular fighters in the MMA game. While the signing of fellow heavyweight Fedor Emelianenko, announced in July, gave the game some added heft with die-hard MMA fans, Couture's appearance will no doubt grab the attention of more casual watchers.

"I have been a part of MMA for over 10 years and I am excited about the global visibility that a game like EA Sports MMA will bring to the sport," Couture said in a statement. "Like my fighting career, I look forward to taking on all comers in EA Sports."

Couture's signing isn't exactly a surprise; Dana White revealed that a deal had been made to allow the UFC Hall of Famer to appear in the game despite his threats that any other UFC fighter who signed up for it would quickly find himself without a job. But Couture is very strongly identified with the UFC and his appearance in the EA Sports game, while the UFC itself has a deal with THQ's competing UFC 2009 Undisputed, is probably the sort of complication that White would rather not have to deal with.

Couture seems to think the matter is relatively simple, however, saying he's "free and clear" to appear in the game. "My fight contract has nothing to do with the ancillary stuff that I do outside of that fight contract. So I don't really see it as a conflict," he said. "I know that Dana and others may see it differently, but I don't. I fought hard to maintain my name and rights and ancillary image since Zuffa bought the company in 2000."

""We have nothing but the greatest respect for what Dana has done with the UFC, but he doesn't own the sport. We want to grow the sport," added EA Sports President Peter Moore. "We are not in the business of trying to curtail the business of this sport for our benefit whatsoever. We got into this sport in particular to help it grow, and we see an opportunity to do that against what is obviously a very well-run, very well-organized organization in UFC. But there's room for both of us, no doubt."