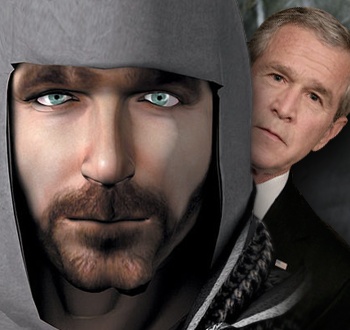 In games like Call of Duty 4, gamers step into the shoes of U.S. soldiers slaughtering Middle Eastern militants without a second thought. But when we switch the roles around - even target the President - is it suddenly offensive?

Games - and gamers - are no stranger to controversy. We decry it when modern TV networks portray our hobby inaccurately, seeing offensive material where there is none (so we think). We wholeheartedly reject the definition of violent games as "murder simulators." But ... what happens when someone intentionally makes a game that is a murder simulator - in fact, a murder simulator where your target is the sitting President of the United States of America?

As Kate McKiernan relates in Issue 215 of The Escapist, that was the case with The Night of Bush Capturing: Virtual Jihadi, a game mod created by Iraqi-born American artist Wafaa Bilal as a way to draw attention to the plight of Iraqi citizens under the American invasion and occupation. Bilal soon found himself in the center of an argument about morality and censorship - why is it okay for one game to demonize an entire group (in this case, Arabs and Muslims) as evil, but not to do the reverse?

Virtual Jihadi is a game where it's easy to see the delineations between the medium (a first-person shooter), the content (shooting American soldiers and assassinating Bush) and the speech (racist generalizations are dangerous). The game uses the videogame medium as a chance to explore what would drive someone to become a suicide bomber (the content). By taking the player through the grief of the senseless death of a family member, Bilal asks the player to consider - not approve, but consider - where these bombers are coming from (the speech). It encourages players to consider that if The Night of Bush Capturing is a mindless recruiting tool for racist violence, Quest for Saddam may be as well.

To read the full story, check out "Cease Fire: A Look at Virtual Jihadi" in Issue 215 of The Escapist.