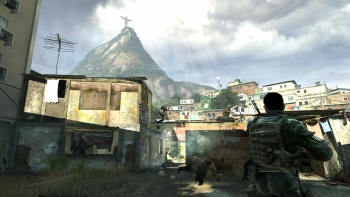 Just when we think games are all about fun and ... games, something comes along to remind us that they are a business, after all: Modern Warfare 2 for the PC will be priced slightly higher in line with the current console pricing structure.

$59.99 is now the normal price for console games, but those that prefer a computer have thus far have been lucky enough to avoid a similar rise in price on PC titles. While this is perhaps done as some sort of incentive to encourage PC gamers to keep supporting the platform, it may not last for too much longer.

Modern Warfare 2 will buck the trend and be priced at a full $59.99 according to retail outlets like Best Buy and Amazon. It does not appear to be isolated to just one retailer, as is the case with the Wii MotionPlus and other accessories being priced $5 higher at GameStop.

Sure, Modern Warfare 2 is predicted to be one of the biggest selling titles of all time, so this isn't necessarily going to spread throughout the rest of the new release section. The desire to profit just a tad more (or 20% more) is an infectious disease that is easily caught, however.