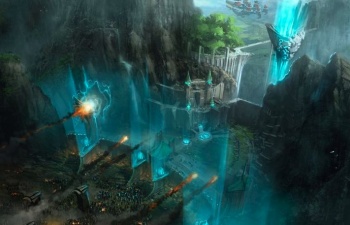 Believe it or not, evidence is suggesting that the "unreleased masterpiece" from Bionic Commando dev GRIN was a game based in the Final Fantasy XII world.

If defunct Swedish developer Grin had stayed afloat, it could have been a part of one of the biggest franchises in gaming today. Sorry, Bionic Commando doesn't count. Final Fantasy, on the other hand? I'd think that a Final Fantasy game would qualify as something of a big deal. In any case, yes, according to the scads of evidence and rumormongering across the internet, Grin's game-that-never-was, its "unreleased masterpiece," as they put it, was apparently a Final Fantasy game.

To be exact, it was an action game set in the Final Fantasy XII universe. Destructoid first got the word from some anonymous sources, which was then given some substance by the uncovering of resumes and multiple pieces of concept art for an unannounced project called "Fortress." The concept art is awful pretty and the FFXII universe is one of my favorites, so it's kinda sad to see what could have been and never will be.

According to Destructoid, this project was the one that caused Grin to go under. You'll recall that the studio cited the reason for its closure as "too many publishers have been delaying their payments, causing an unbearable cashflow situation." Well, apparently Square owed Grin as much as several million dollars, which I can imagine wasn't good for business.

There are a few interesting things to be gleaned here, though. One, apparently Square either isn't in the financial shape it needs to be to pay for its games to be made, and two, apparently they've started letting Western developers work on their most important of franchises. Too bad we'll never get to see how it would have worked out.